When my older sister calls out of the blue to announce she’s getting married, it’s a shock. She’s
not the settling-down kind, and we haven’t spoken in almost three years.
Even more of a shock? Sloane wants me to visit her and meet her new fiancé. Curious, I decide
to take her up on the offer.
I should’ve known something was wrong when she wouldn’t tell me where I’d be going. I
should’ve known things were odd when she sent a private jet to pick me up. But there’s no way
in hell I could’ve ever guessed what would happen when I finally meet her fiancé.
Declan O’Donnell.
Head of the Irish Mob.
Target of a savage Bratva assassin who wants revenge for the murder of his brother.
Now, I’m thousands of miles from home, I’m smack in the middle of a mafia war, and I’ve got a
Russian assassin who’s decided he likes the looks of me.
They say revenge is a dish best served cold.
They never met Malek Antonov.

OOOH! I was excited to start this book and it did NOT disappoint! I was completely sucked in and enjoyed this ride J.T. Geissinger took us on! I loved Malek. He was a big, scary sociopath and Riley just couldn't help herself :) Clearly, their lives were on a different path but she definitely gave him a run for his money. He wasn't expecting her sassiness or stubbornness and yet, there was something about her that drew him to her. I loved their banter, the heat between them and how much he cared for her. I couldn't read this book fast enough and I HIGHLY recommend!

“Yeah. Oh—can I ask you a favor? Will you please not hurt him? Kieran, either. He’s the other bodyguard. The bigger one. They’re both really nice.”
Malek stares at me in disbelief.
“Sorry. Is that asking too much? It’s just that I’d never get over it if they got hurt because of me. They’re only trying to do their jobs.”
After a moment, he says angrily, “You know who I am. You know what I do. Correct?”
“Yes. I’ve been filled in on the particulars.”
“And you’re lying there with my hand around your neck asking me not to hurt your bodyguards.”
He says it like my sanity is in question.
“I know it’s maybe a little unorthodox.”
“No,” he says flatly.
“Please?”
He growls, “What the fuck is wrong with you?”
“There’s no need to get testy.”
“Testy?”
“I’m just saying. You don’t have to get all mad about it.”
Furious again, he glares at me, grinding his jaw and probably calculating how much pressure it will take to snap the brittle bird bones in my neck.
Before he does, I say, “I also want to thank you for the rose you left me. That was really nice. I’ve never had a man bring me flowers before. I know it was only the one, and also you thought I was a captive prostitute at the time, but still. It was thoughtful. So thank you.”
He stares at me with an expression somewhere between confusion and amazement, with a healthy dose of disgust on the side.
“Now is probably a good time to remind you that I’m still the same person you left the rose for. So if you did kill me, you’d be killing her, too. Just a thought.”
“Are you on drugs?”
“Not at the moment, no. Why, do you have any?”
“There’s something wrong with you. Mentally. Right?”
That makes me laugh. “Oh, totally. I’ve got more than a few screws loose. At least that’s what my dad tells me. But he’s super uptight, zero imagination, so his opinion doesn’t really count. Not that he’s wrong, because he isn’t, but normies shouldn’t judge creatives. They just have no idea how we’re wired. Why are you looking at me like that?”
“I’ve never had a conversation with an insane person before.”
“Very funny.”
“It wasn’t a joke.”
“Ouch.”
We stare at each other in silence. His hostile, mine hopeful. He still hasn’t murdered me, so things are looking up.
“Malek?”
“What.” He says it flatly. With dread.
“Thank you for not killing me.”
He says emphatically, “Don’t thank me yet.”
“You’re still deciding?”
“If only to get you to shut up, yes.”
“In that case…” I make a zipper motion across my lips.
He watches with outrage, astonishment, and absolute disbelief.
“Actually, before I shut up, I also want to say that it was really sweet that you tried to save me from being a sex worker. I mean, what a gentleman! A gentleman killer who gives strangers big wads of cash in restrooms. You’re quite the puzzle, Mr. Ghost. Or is it just Ghost? I’m never sure how the nickname thing works, except between me and my sister, but that doesn’t count because my whole family is a little weird. I’ll just call you Malek, if that’s all right. Or Mal for short, since we’re such buds now, what with you breaking into my various bedrooms for midnight visits and all. Okay, I’m shutting up now. Here I go.”
I press my lips together and gaze up at him, watching him struggle with dueling urges to cut off my air supply or break something over my head.
Maybe he’s right about me being insane, because rather than terrifying, I find his indecision understandable.
He’s not the first man I’ve driven to the brink of murder. He’s just the most capable of actually going through with it.
“Oh, one more thing—”
“I know a way to keep that mouth quiet,” he snaps.
Then he kisses me.

J.T. Geissinger is a #1 internationally bestselling author of twenty-seven novels. Ranging from funny, feisty rom coms to intense, edgy suspense, her books have sold over five million copies and been translated into more than a dozen languages.

She is a three-time nominee in both contemporary and paranormal romance for the RITA® Award, the highest distinction in romance fiction from the Romance Writers of America®. She is also a recipient of the Prism Award for Best First Book and the Golden Quill Award for Best Paranormal/Urban Fantasy.
She’s a Southern California native currently living in Nevada with her husband and rescue kitty, Zoe.

A Bratva assassin so feared, some won’t even dare to speak his name.

He comes in search of vengeance for the death of his brother, but what he finds instead is me.

A girl he thinks is someone else.

Someone unrelated to the man who killed his brother.

And when he finds out my true identity, he decides to take me as repayment for what he lost.

Now, I’m a little bird trapped in a cage, and the only way to survive is to make friends with the monster who captured me.

Except friendship isn’t what the monster has in mind.

J.T. Geissinger is a #1 internationally bestselling author of twenty-seven novels. Ranging from funny, feisty rom coms to intense, edgy suspense, her books have sold over five million copies and been translated into more than a dozen languages.

She is a three-time nominee in both contemporary and paranormal romance for the RITA® Award, the highest distinction in romance fiction from the Romance Writers of America®. She is also a recipient of the Prism Award for Best First Book and the Golden Quill Award for Best Paranormal/Urban Fantasy.
She’s a Southern California native currently living in Nevada with her husband and rescue kitty, Zoe.

I thought this book was SO FUN! A completely unique take on vampires and how these humans were engaging with one. This book held me completely captive and I didn’t want to put it down, even to sleep! I loved the banter between Oliver and Autumn. They have an immense dislike for one another and I was here for it! I couldn’t read this fast enough and I can’t recommend it enough! Do yourself a favor and grab this book today!! 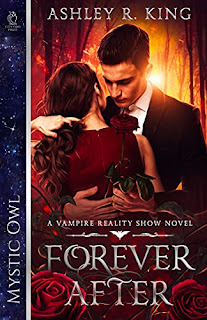 On the Vampire Reality Show, Forever After, an immortal bachelor isn’t the only plot twist.Autumn Reid is in a rut. At nearly thirty, she hasn’t ventured outside the small town of Covey Crossing. When she spots an ad for a new dating show, Forever After, she jumps at the chance for adventure. But this show has a paranormal surprise—a vampire bachelor.With the winner receiving cash or immortality, it’s an enticing prize. But Autumn doesn’t expect to get that far, she just needs a change from her dull life. Falling for the hot vampire duke isn’t part of the plan.Impoverished duke Oliver Gray desperately needs money to save his estate. When he’s offered the bachelor spot on Forever After, he has no choice but to accept. But there’s a catch—he must wear Victorian clothes and pretend he’d been hibernating for the last one hundred years.Fine. He can don a top hat and fake clueless. But a feisty human with a smart mouth? That’s more than he bargained for, especially when something deep inside insists she’s his fated mate.But Oliver and Autumn’s dreams of love and romance may be cut short when a killer takes out the contestants one-by-one. As the show’s finale nears, will they get their forever happily-ever-after?
Posted by Abs at 8:00:00 AM No comments:

I enjoyed going back to bliss and seeing what was in store for Lucy, Michael and Tyler. Tyler has loved Lucy for years unbeknownst to her and she has a thing for brooding men. Michael experienced a trauma and has steered clear of most people but there’s something about Lucy. I enjoyed their dynamics and the care they had for one another. Bliss is a quirky little town but I was happy to go back and I hoped that danger wasn’t lurking too close! 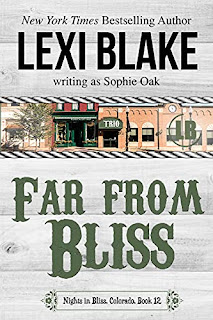 Shattered by the past

Michael Novak was a US Marshal with his whole life figured out. Right up until the woman he called partner betrayed him. He’s been hiding in Bliss, CO, trying to pull himself out of the darkness. The only bright light is Lucy Carson. Something about Trio’s favorite waitress calls to him, but he can’t trust his instincts anymore.Yearning for the futureLucy has loved Tyler since they were kids, but he never seemed to feel the same way. She worried she would never want a man the way she does Ty, and then Michael grumbled his way into her world. Beyond the broody exterior she sees a burning fire in his eyes, and she is drawn to that flame.The time is finally rightTy knows Lucy is the one for him, but Lucy wrote him off romantically long ago. If he could get her to see him in a different light, he knows she would realize that they’re perfect for each other. His obstacle is the town’s reclusive former lawman, Michael. But this is Bliss. A rival can turn into a partner for the right woman. And Lucy is definitely the right woman.Ty approaches Michael with a plan to get Lucy between them. A bargain is made, and Lucy is their target. But Lucy is already in much more dangerous crosshairs. Murder has come to Bliss, and Lucy is at the center of the investigation.

Hell Hath No Fury, an unforgettable tale of loss, betrayal, and revenge in this romantic suspense standalone by RC Boldt, is now ... 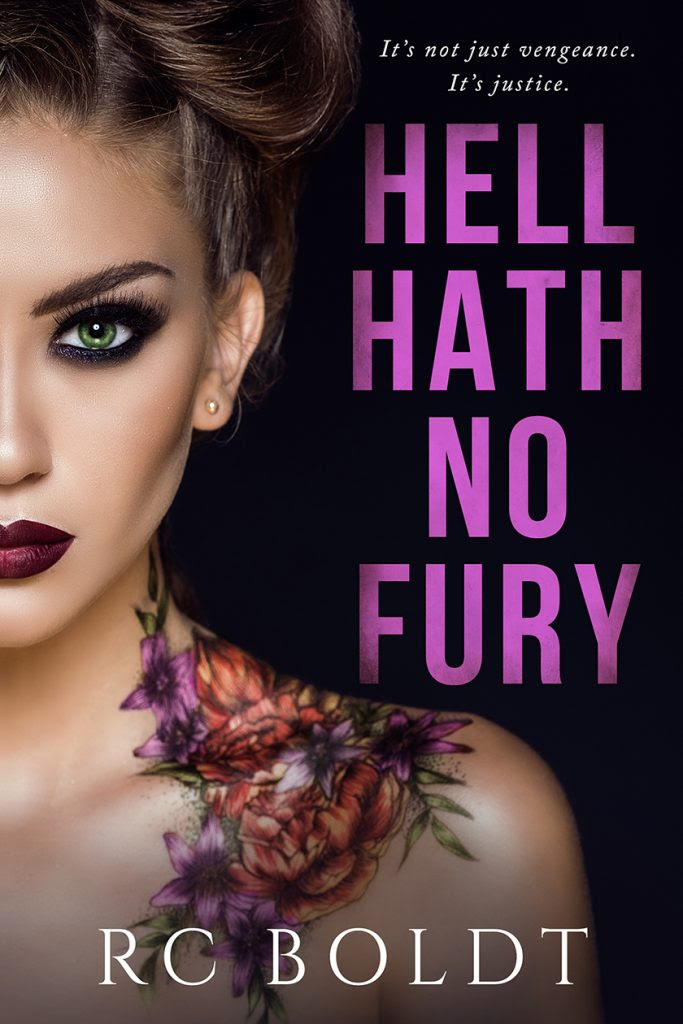